We made this Blue Lotus of blend of high quality Blue Lotus stamens and flowers to provide the full spectrum and strength of the plant. Although Nymphaea caerulea is referred to as the Blue Lotus or Sacred Lotus, it is technically a water lily.

Our Blue lotus is handled with care and dried properly. This results in fresh stamens and beautiful blue flowers that retain their vibrancy and flowery aroma.

Traditional Usage: Blue Lotus has been used in throughout Asia for over 1,500 years. It was brought to India from Egypt, where it was associated with the Sun. Much like the Sun, the Lotus flowers open in the morning and close in the evening. Often the Egyptian God Horus was depicted sitting or standing on the lotus, and later Brahma and the Buddha were also depicted atop of a Blue Lotus flower.

This flower is believed to be eaten by the mythical Lotophagi in Homer’s Odyssey. Blue Lotus grows along the banks of the Nile River in Egypt, and is featured prominently in many Ancient Egyptian artworks and temples.

Blue Lotus has a long history of use. Usage dates all the way to the Ancient Egypt, and it is believed Blue Lotus and other Aporphine containing plants were also used by the Mayans. It has been used in many forms from tea and brewed preparations, a wine additive, and sometimes added to smoking blends for its mild sedative effects, flavor and aromatics.

The active constituents of Blue Lotus are reportedly analogous to those in Nelumbo nucifera, which is said to produce feelings of relaxation, clarity, lightness, and well-being. 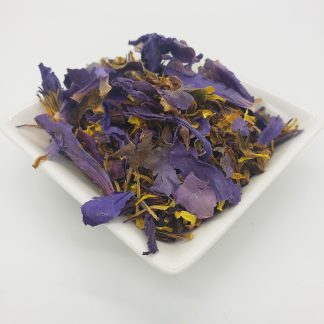 You're viewing: Blue Lotus Flowers and Stamens (Nymphaea caerulea) $11.00 – $225.00
Select options
Are you 21 or older? This website requires you to be 21 years of age or older. Please verify your age to view the content, or click "No" to leave.